In the Heat and the Heart of Summer

Posted on August 2, 2011 by clutterheart 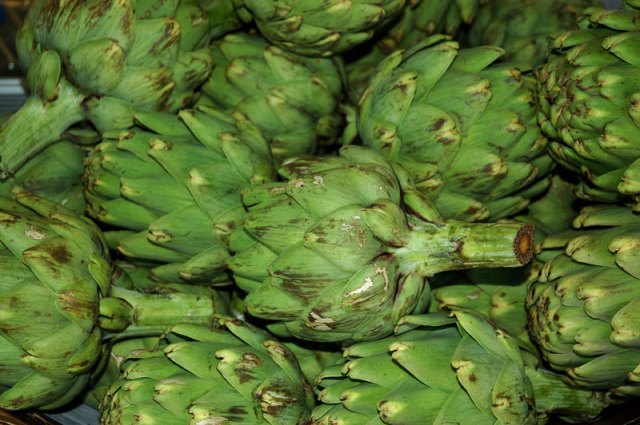 My mother’s air conditioning broke and the heat got to her head. Her friends and neighbors phoned me all weekend, pleading with me to come pick her up to save her from the heat.

“But, it’s hot here too,” I explained. What good was it going to do to add one + plus dog into our apartment, which doesn’t have air-conditioning either? I attempted to arrange a window unit to be installed in her home in the meantime and during the negotiations, my mom kept hanging up on me, punishment I suppose for not coming to her rescue…punishment for being a heartless daughter.

My temper flared with frustration and in the heart of the heat of summer and tempers, what better way to get your mind off of things than to fry something?

I never got over the scene in the move, Eat, Pray, Love, where a woman, dining outside in Italy is shown eating something wonderfully crispy, delicately fried golden, something lusciously yummy oozing out as she cut it with the side of her fork. I thought maybe it was some sort of fried cheese thing, but with a little research, I found out she was eating a fried artichoke. I bought two of the biggest ones I could find and followed the instructions:

1.) Bend back outer leaves until they snap off close to base, then discard several more layers of leaves in same manner until you reach pale yellow leaves with pale green tips.

What pleasure I found in ripping off these fleshy leathery leaves, throwing them aside into a big artichoke pile. I marveled in the colors that changed as I came to the center of the cone flower. The leaves were piney and stickley, and I managed to acquire a few splinters in the process. At the center was the heart covered with hair…and it made me curious as to where artichokes come from. They almost look like some sort of underwater sea creature. I plucked the heart free of the hair…and found the vegetable reduced to what resembled a purple mushroom, that quickly turned grey with exposure. I submersed it in lemon juice and proceeded to do the same thing to the other artichoke.

The only frying oil in my cabinet was red palm, so that’s what I used. I heated up the orange oil until it crackled and bubbled when I sprinkled it with drops of water flung from the flick of my fingers.

I submersed the stemmed hearts, and watched the red palm bubble over them in rapid excitement, and it reminded me of the geysers in Yellow Stone that came up out of the earth, reaching for something beyond them….orange oil spilled and spattered over the sides of the frying pot, catching the flames that climbed up the sides, into the oil pot and up into a fiery spout.

Just as it occurred to me that the flame in my kitchen could do some damage if I didn’t put a lid on it, the fire came down and climbed back into the tame ring of blue flames tipped with yellow, where it belonged. It just needed one minute of unleashed glory to demonstrate its large and dangerous beauty, dancing above my head in the heat, demanding my respect…frying my hearts…to be served with cayenne aioli sauce, in the heat and the heart of summer.

*The air conditioning at my mother’s house is being repaired as we speak, and I’m happy and grateful to report that with the assistance of her friends and neighbors, she has survived the ordeal.

You don't know me, but you will.
View all posts by clutterheart →
This entry was posted in Uncategorized and tagged Eat Pray Love, Fried artichokes, heartless daughters, heat, kitchen fires, red palm oil, tempers. Bookmark the permalink.